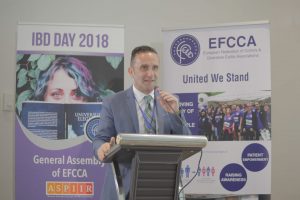 1) How are EU public policies impacting patients? Can you give us concrete examples?

S.L « There are some positive examples of how EU policies have a beneficial effect on patients such as for example the Cross Boarder Healthcare Directive. This directive allows EU citizens to have the right to access healthcare in any EU country and to be reimbursed for care abroad by their home country. This is particularly important for people with a chronic condition such as Inflammatory Bowel Disease. IBD affects of 3.4 million people in Europe and sadly it´s increasing in particular amongst young people.

Therefore, Cross Boarder Healthcare is essential for many youngsters but also older people with IBD as they feel more at ease travelling within the European Union knowing that if they encounter any medical problems they will be reimbursed in their home country. And in general, making the prospect of travelling, studying or living in another EU country much easier.

On the other hand we feel that there are still shortcomings in EU public health in particular as concerns equal access to healthcare. EU health policy includes the concept of protecting and improving health and aims, in theory, to ensure equal access to ¨modern and efficient healthcare for all Europeans¨. In practice we feel this is not the case. A recent project that we have undertaken called “Mapping of innovative medicines and devices in EFCCA member countries” showed that there are still significant health inequalities between member countries and also within regions of countries on issues such as healthcare systems, reimbursement policies and access to treatment. »

2) What are the main issues that your association defends?

S.L « As mentioned above we are trying to raise awareness of existing health inequalities not only between Member States but also within regions of national members. We are extending this project with the aim of some advocacy work aimed at EU officials both of the European Commission and the European Parliament.

Furthermore, our new strategy plan for the period 2019 – 2022 has as its overarching objective to tackle discrimination, since discrimination, in its various forms, including impeded or limited exercise of rights and access to services, emerged to be one of the most significant burden on IBD patients.

Previous projects and studies that we have carried out highlighted how IBD patients are discriminated in different settings and contexts, such as discrimination at work, unequal or inadequate access to health care or health information and lack of involvement in decision-making. »

Within discrimination four priority areas have been identified with the purpose of better tailoring EFCCA activities:

3) By what means does your association manage to make the European authorities aware of your issues?

S.L «We have organized several events at the European Parliament in order to raise awareness about the daily struggles that people with IBD face. The conference
“Equal Rights for Citizens with IBD” which we co-organized with the European Crohn’s and Colitis Organisation (ECCO) and United European Gastroenterologists (UEG) called for actions to ensure equal access not only to better treatment option and health care services but also to education and the labour market.
We also initiated an open debate with Members of the European Parliament about patient safety and patient rights especially as it pertains to biosimilars and biologic treatments. We stressed the importance of patients’ right to information and knowledge as well as equal access to innovative drugs and health care in all EU member states.
And of course we participate in regular meetings together with other European Health Umbrella Organization’s to ensure that the patient concerns are being heard.

At the European Commission level, we have been involved in several activities such as workshops and advisory meetings providing the patient perspective.

For example we put forward our recommendations at the workshop on Access to and Uptake of Biosimilar Medicinal Products organized by the European Commission´s Directorate General for Internal Market, Industry, Entrepreneurship and SMEs (DG GROW). The objective of the workshop were to facilitate a multi-stakeholder exchange of information, experiences and reflection on the state of play of biosimilar medicines and explanations for differences in market uptake amongst the EU Member.
We have also collaborated with the European Commission on the publication of an information brochure for patients about biosimilar medicines. The document explains in a clear, unbiased way what biosimilar medicines are, how they are developed and approved in the EU, and what patients can expect in terms of availability and safety.

We have been involved with the World Health Organisation (WHO) in the consultation on patient safety which we believe is the first step to establish a system of global pharmacovigilance.Despite the fact that the proposal was based on a voluntary action, we hope that the important role of WHO could encourage the relevant agencies for the evaluation of medicinal products – in Europe and worldwide – to embed it in their regulations. »

4) Since January 31, 2019, it is mandatory to make public meetings between elected representatives and representatives of interest groups, what are your views on the policy of transparency vis-à-vis the lobbying put in place by the EU?

S.L « We welcome this and believe it´s a very important issue. We find that very often smaller patient associations or for that matter other smaller civil society organization find it much more difficult for various reasons, such as in terms of finance, logistics or capacity, to gain access to meetings with MEPs.

Then there are many powerful and influential lobbyists in the Brussels arena who have a whole machinery behind them to support their work. We believe citizens have the right to know who their elected MEPs are meeting.

We expect that this new transparency will result in more open dialogue with policymakers and hopefully in a more balanced calendar of meetings. »